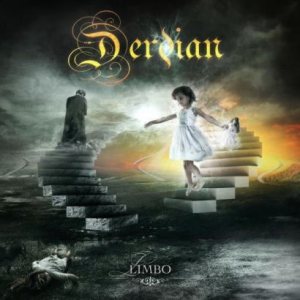 ‘Limbo’. Quite apt as it goes…

Italy’s Symphonic Neoclassical Progressive Power Metallers (!) Derdian have spent their last 3 albums exploring the realms of their self enforced Fantasy land trilogy, limiting them lyrically and planting them firmly in the shadow of fellow countrymen Rhapsody (be it “Of Fire”, “Luca Turilli’s” or whatever other moniker they are touting this year!). With a minuscule budget in comparison it was a thankless task and I have to say that after a promising debut parts 2 and 3 rather washed over me.

So the band found themselves literally in limbo for the first time in nearly ten years – no label, no singer, no lyrical concept – so how have they regrouped? The new singer is a great start, mid range with the ability to spring an octave above or below if needed and the blast beats on the intro ‘Carpe Diem’ certainly got my attention.

At this point it needs to be said that there have been many very talented bands peddling variations of this style from Italy. Labyrinth, Athena, Vision Divine, Shadows Of Steel, Time Machine…the list goes on, but in a way this latest Derdian opus and the spirit it is performed in is a testament – and a tribute – to all of them.

And it is a bit of an opus – Basically, unleashed from their previous shackles and without a record label’s guidance it feels like the band have written what they really want to. The title track alone covers everything from Cynic to Angra, and there are all sorts of different Metal influences thrown in to other tracks. But on the flip side ‘Heal My Soul ‘ and ‘Strange Journey’ are classic Stratovarius Power Metal. Safe and dependable. But this in itself seems to emphasise that Derdian know, and have found the edges of their chosen genre and just pushed them out a little further. No change of style, no samples, no ‘modern’ keyboard sounds…just pushed the envelope a little. Made it just a little less predictable. This makes each song just that bit more interesting as you really don’t really know what is coming next…though you remain safely wrapped up in your big fluffy blanket of Neoclassical Symphonic Progressive Power Metal…Toastie and warm….