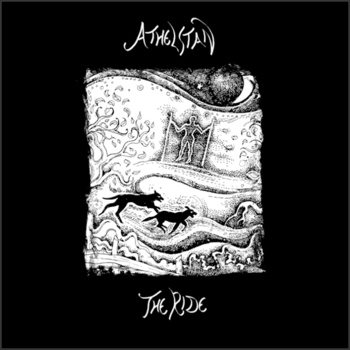 With his brother Wulfstan, Athelstan is one half of the terminally underrated English “Anglo-Saxon metal” band Forefather who quietly ply their trade drawing exclusively on the Anglo Saxon period of England’s history. At first a solo album from a duo who are brothers and never play live and who have a huge diy ethic down to the label they own seems a curious idea; what does one half of such an insular grouping have to say that they can’t say in Forefather?

A fair bit it seems.

Keepers Of The Dawn at first seems like a quiet Forefather song; that distinctive, melodic guitar sound and clean vocals to the fore. But suddenly there comes out a short musical expression, a folky run on guitar that just lifts the song but in a lighter way than Forefather. Almost classic rock. Ascent To The Tarn takes this further; gentle, flowing piano melody, sometimes accompanied by guitar sometimes overtaken. Instrumental, gentle, bright and stunningly in Wishbone Ash territory rather than pagan metal. It is hugely engaging, pastoral music. Not weak, simply light and evocative.

The songs on this album apparently were written over a period of around fifteen years but you would never know it so well do they fit together as an album. There is a peaceful sense to much of this album, mist and sunlight, almost a ride through the countryside with a deeply felt but more often than not uplifting touch. The melody refrain in the title track just brings that sunlight to me, rising over a hill as we ride onwards. It builds, too, and with its spiderweb intricacy makes you want to sit back and just let the landscape speak.

Enchantment (Bewitched) is the oldest song here and with soft but deeply emotional keyboard and harp is as close too Clannad as I’ve ever heard from out of a metal background. It is delicate and simply so pretty a dance that it couldn’t have a more fitting name. Haunting.

It’s just about here that you realise that just as Forefather did with their last two albums Steadfast and Last Of The Line, Athelstan has crafted something quietly special with The Ride.

Hero On The Hill, inspired by a hill carving, is at first more up tempo, vocals once again provided by Wolfstan and a guitar line strong and stirring. However it eases into a much more thoughtful song with a feel of loss suffusing the folk tinged melodies that lace through it. The March has a more strident rhythm but for all the strength there in the metal guitar riffing, there is also that touch of the quiet. Sometimes it is as though you are watching ghosts march from history; out off the hills and down the vale they go, as they did a thousand years ago. A sense of looking back takes me with this album, that though our feet are planted firmly in 2013 the album is turning it’s face away and back through the centuries to a time that resonates with Athelstan much more keenly. The closing song, the almost heartrending Anomie (The Death Off Belief) just strengthens this feeling of a modern man trying to reconnect with the history off the land he standards upon. Melancholy violin and keyboards in a slow, painfully beautiful epitaph that makes me choke up for the passing off an age.

Athelstan here takes us on a ride indeed; rock, folk, metal, cinematic glory and regret all folded up in his warm woolen cloak. Beautiful, emotional, thoughtful and often a word I never would have associated with anything from the Forefather corner: Pretty. Truly pretty.

To me this is an album about memory; the memory held fast by places. We may no longer remember their names but the land remains and, maybe, it will gift us with just a glimpse now and then of what has gone before.