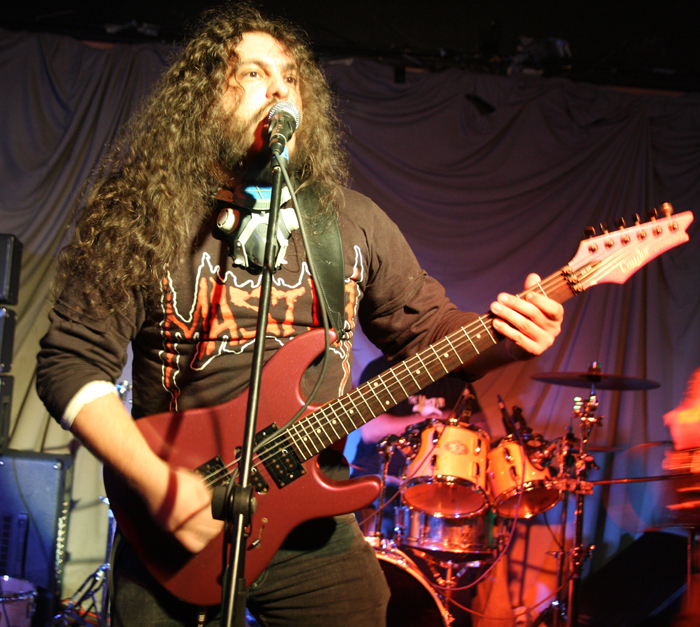 The Unicorn is fast becoming the place to go and the pub is putting on some excellent extreme underground metal shows at the moment, best of all they are completely free. Another good thing is the hipsters stay safely down the hill in their Camden enclave and it seems to be only the real fans of the bands turning up here. Before I go on I have to raise a figurative glass to the bar staff who were savagely out-swamped by punters tonight and worked heroically to keep us all watered. I hope you got a chance to relax with a glass or 6 after the chaos was over.

Tonight was partly Brazilian night with some visiting S American Kommrades playing with two London acts. Having said that, first band Sturmtiger originally derive from Denmark. The sound of war swamped the stage along with dry ice making this an exercise in the trenches and musically it was incredibly brutal from the off. Having heard their last demo I knew what to expect but the trio literally flattened the place with chunky guitar sound, heavy rumbling bass and low vocal assault. The drums beat mercilessly over the top and the deathly tumult commanded head banging for those brave enough to snap necks to it. At full velocity the band blasted hellishly with a barbaric, aggressive and chaotic edge. The odd bestial solo flew out amidst it and what they lacked for in technicality they more than made up by bulldozing their way through things. There was absolutely no catering to any trends here, annihilation was the one sole purpose even when a bit of a groove and melody put in a brief appearance it was just as vicious. Unleashing the ‘Atomic Hammer’ at the end there was no denying the potency of this attack.

First Brazilian band of the day were Hellkommander another trio, with bassist Leatherface donning a sinister looking shiny black mask to perform in. Although everything gelled perfectly there was something undeniably thrashy and trashy about their style. It was by no means as brutal as I may have been expecting and if anything was even quite accessible as the band simply got down to things and fired out the choppy riffs like a garage punk band on speed. It also got the crowd riled up nicely with people jerking around like headless chickens at the front. Guitarist and vocalist Poisonhell was a mass of curly hair and his clean singing stance suited things perfectly. They slowed things down on the second number with some doom laden riffs and then pushed it back to fly away into a speeding rampage, flirting between the two styles flawlessly. ‘The Cursed’ saw some classic metal riffs and then more of that adrenaline fuelled thrash which gave everything a real old-school feel about it and one that was impossible not to enjoy.

I should really have caught Decrepid before but don’t think I have. I do quite often see their “Live at The Purple Turtle” album cropping up on a well known Internet auction site but had no real clue as to what to expect as the band took to the stage. At least they were slightly different not being just a trio and they really filled up the stage but it was evident that the imposing bald singer Cris was going to be the focal point. After tuning up with some classic Sabbath vocals they moved far from that comfort zone with chundering vocals like sewage sliding down a drain, abrasive and jagged riffing and a lot of grind mixed into their deathly backbone. The words chunk and chewy sprung to mind and were kind of a good fit and although this was quite abrasive it sounded damn sharp and was delivered incredibly tightly. The two guitarists fleshed things out and bass definition was nice and thick. They obviously had some fans here too and as I attempted to get some shots I was getting whipped by Hackney squat crustlocks. Unfortunately a good part of the set was spent queuing to get a drink but I could still certainly hear what was going on very loudly and came to the conclusion that this lot could have picked the name Napalmcorpse and suitably got away with it. Their brand of pummelling goodness was dynamic, tight and precisely delivered.

Hold on déjà vu! Well air fares are expensive from Brazil so it is just as well really that the three members of Sodomizer were exactly the same as the three from Hellkommander. Was there going to be much of a difference in style though? The biggest one was quickly evident as it was the now de-masked Leatherface who was taking over the vocals this time around.  I guess this gave Poisonhell more time to concentrate on firing out some scorching solos and fiery riffs and you really could see him getting into things but the thrash attack and the adrenaline fuelled delivery were again very much present. It fucking rocked too and if any flesh tunnel, neck tattooed skinny hipster types had wandered in they would have no doubt creamed themselves thinking they had found a new Kvelertak. Musically Sodomizer were pretty damn addictive both to listen to and watch. The trio powered into an instrumental jam which was again completely seamless and precise with some elongated guitar licks being driven to a full thrashing tumult. Talk about firing on all cylinders. The dirty speeders also love their horror and even have a song named after the king of the dead Lucio Fulci, you cannot mess with that! It was a bit too fast moving for any flesh eater but nobody was complaining. There were times I was reminded of Deceased and others like the blazing ‘Dead By Witchcraft’ probably due to name of Witchery when they were good. The guitarist was by now on his knees playing his axe as close to the floor as possible, the pit was chaotic and beer was flying all over the place. What more do you need in a show? 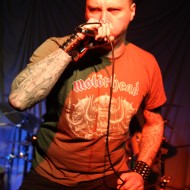 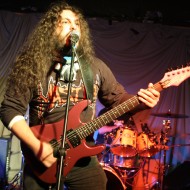 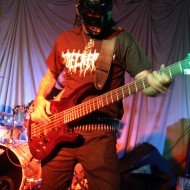 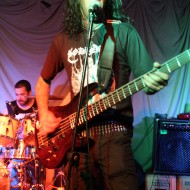 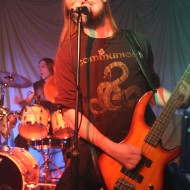