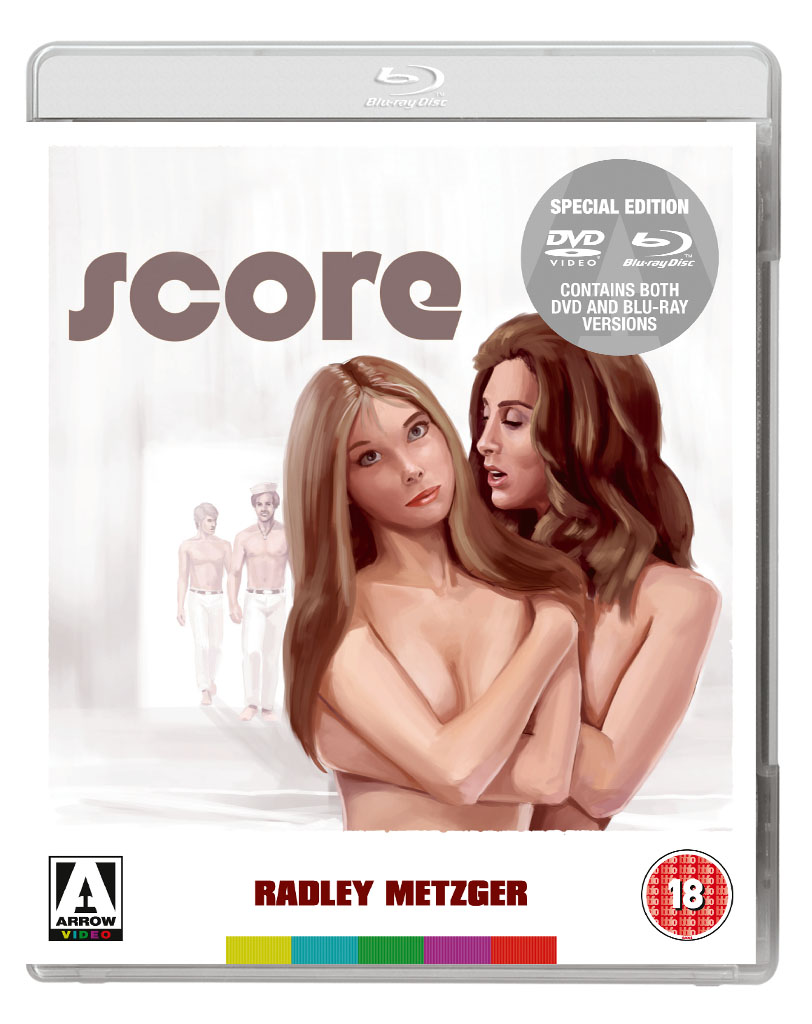 The third feature in the Arrow Radley Metzger Collection Score was made in 1974 directly before he went into more explicit films such as ‘The Private Afternoons Of Pamela Mann’ (under the name of Henry Paris) the following year. This ‘seduction comedy’ really bridged the gap between the two sides of the coin and was actually filmed with two versions being available, this is the theatrical cut here and not the xxx version but it certainly does not hamper enjoyment of the movie as far as I am concerned as most of the missing shots appear to be cut from a dalliance between the two male leads in the film.

Set in Croatia but placed in the imaginary city of Leisure we are first introduced to Elvira (Claire Wilbur who had appeared in the stage play of this dramatization along with Sylvester Stallone), a hedonistic care free lady who is partner of Jack (Gerald Grant) an equally headstrong character. A voiceover puts things in context and it illustrates the persuasive humour of the movie in much the same sort of fashion as people at the time were no doubt accustomed to hearing in the Russ Meyer Vixen trilogy. Psychedelic beat music not a million miles from The Byrds follows Elvira round town and back home where she divests her long raincoat giving no real surprise that it is all she is wearing. We are aware of another couple Betsy (Lynn Lowry) and Eddie (Calvin Culver) who are vague friends but are meant to be hooking up with them for dinner. In the meantime the two ladies are left to their own devices and flirting is set up with the dominant Elvira literally playing Betsy as prey. They are interrupted by the butch telephone repair man Mike (Carl Parker) who in a scene aped by a million pornos is the handyman who gets coffee spilled onto him necessitating clothing divestment. Elvira and the none too complaining Mike do their stuff with a nervous but curious Betsy watching before seemingly coming to senses and leaving. Metzger again uses the camera in interesting ways, in one scene the two girls are having a conversation but rather than cutting from face to face the screen takes in the cups of coffee they are stirring moving from one to another. The sex scene is raunchy without going too far and the suggestion of going for Mike’s tool is left for the hammer that Elvira fondles more than anything else.

Later the two couples get together for an evening of entertainment which it unfolds with no surprise is all a game between Elvira and Jack to see what they can do with the naïve and somewhat innocent other couple. It is obvious that Eddie has homosexual tendencies and Jack has his eye on him as does Elvira for Betsy. Dope and drink are partaken and things really develop when the dress-up box comes out. Eddie has his dream of being a cowboy realised, Jack is a sailor and Elvira a nun, as for Betsy straps of nothingness suit her well. It is worth mentioning Lynn Lowry, as at 24 she was a striking actress who was found by Metzger after appearing in Troma production Sugar Cookies for Lloyd Kaufman (annoyingly not on their You Tube channel). Genre fans will also know her from George Romero’s The Crazies and as Nurse Forsythe in David Cronenberg’s Shivers. She has what can only be described as a wan appearance and played washed out almost stoned characters, displaced by what is going on around them. She does just this here and along with her air of innocence it fits the roll perfectly and it is no surprise that this actress who is still very much working today had both Penthouse and Playboy clamouring for her after this feature. She also gets some classic lines in this but the stark shock delivery of the words “Jesus Christ” as Elvira comes in dressed as a nun says it all, you can see the glimmer in her eyes and she is “turned on” by more than the dope and you wonder if this submissive character is going to come out along with her husband Eddie. Their fall from grace is compelling to watch and before you can say “it’s, midnight, cowboy” things are heating right up. It is not difficult to see why this had censorship problems and even in this form was originally refused a certificate. It does go beyond suggestibility at times and there are shots of full frontal nudity along with, bondage, toys and drug taking. Although clever camera angles are at times used along with distorted frames you don’t get quite to see the (for want of a better phrase) money shot but it is all close to the knuckle and the simmering tension is erotically charged in the extreme. You can spot the frame jumps in the scenes between Eddie and Jack easily due to the music skipping, some say this version ruins the excellent soundtrack but I can live with that.

Some fascinating extras include a ‘making of set report,’ where amongst other things we learn the incredible fact that apart from the lines and necessary acting between the two female leads Wilbur refuses to even talk to Lowry after finding out she was getting  paid more than her. This is also addressed by Lynn Lowry in a recent interview along with many other illuminating anecdotes. It is a shame to learn that out of the four lead characters, she is the only one still with us.

So that’s it for this fascinating trilogy and all three of these movies were great viewing on many different levels and prove there is much more to the director than just smut! As for further releases, well you are probably going to have to go beyond the censorious English zone to find them but having seen it I can totally recommend the Region 1 Synapse release of The Punishment Of Anne which was made in 1975.

They just don’t make films like this anymore and it’s a great shame too!