Necocurse – Grip Of The Dead (Pulverised) 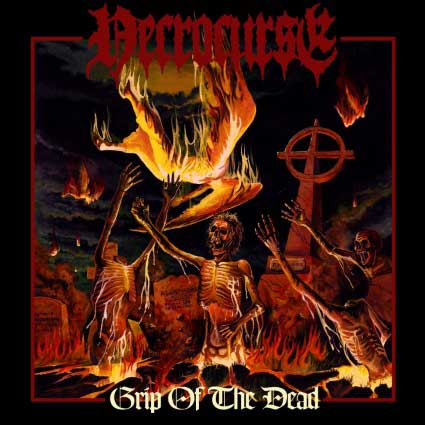 “Hellbutcher?! Is that you?” are my first thoughts as the debut album of Swedish death metal upstarts Necrocurse blasts from my brand new stereo. Surely there’s only one vocalist so interchangeable and recognizable at the same time… it’s glorious beyond all doubts. Reminding myself the Bröderna Hårdrock are by no means a Siamese-entity, things start slowly coming together in my cider-infested cerveau.Venturing out without his twin bro Tyrant, this indeed is the Hellbutcher of Nifelheim-fame. (If you do not know of Nifelheim, stop reading immediately. Do whatever in your power to order ‘Servants Of Darkness’ LP! You should be ashamed of yourself! Jesus… one born every minute, I guess).

With things up to a magnificent start, let us actually listen to some of the music. Unsurprisingly, what we get is Nifelheimish Swedish death metal of the highest order. Played at high velocity and loaded with hook after hook. Production is somewhat cleaner than on previous works, having been partially recorded by Andy LaRocque [axeman for King Diamond] at his Sonic Train Studios.

As mentioned Necrocurse are catchy as fuck. As with Nifelheim, the song-title-repeating choruses are always there, tying together songs in that most Swedish of ways.  Songs like ‘Necrocurse’ and ‘Devil Cobra’  are instant earworms and I find soon find myself pounding that fist. It’s a ferocious tour de force, of sorts, and an ‘instant hit’.

In all its catchiness, ‘Grip Of The Dead’ does run into all-too-common problems. Monotony is not the right word, but it is the word that comes to mind. Whilst not necessarily a major flaw, the choruses do bring a sense of minimalism into what is well-thought out, semi-complex music. After several listens, in fact, the frequent return of the chorus ends up taking away from the track’s impact. I wouldn’t say that all numbers sound the same, but Necrocurse are aware of their own limits and don’t step out of the comfort zone. Also, whilst LaRocque has done a magnificent job with the production, echoes of the let-down that was Nifelheim’s previous album ‘Envoy of Lucifer’ do linger in the air.

Admittedly, the previous paragraphs gives a quite bleak view of it all, Necrocurse’s debut is in fact an incredibly enjoyable record. Whilst it plays it safe and simple – to a degree – it’s this aforementioned comfort zone that makes the record what it is. By not preaching any thresholds, an amazingly solid album is offered. One that should excite any fan of the genre… it certainly does it for me.