Hessler – Comes with the Territory (SR) 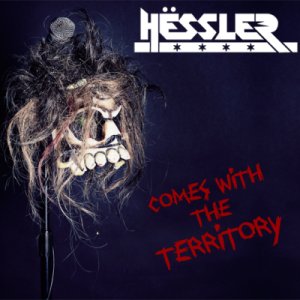 Chicago female fronted rockers ‘Hessler; haven’t given up on the scene yet. Having given them a so-so review last year, I was excited that they wanted me to receive and hear their second release ‘Comes with the Territory’

‘Waste away’ , the first track on the album has a catchy as hell riff, even if it is way too polished ( I know I complained in my last review saying they sounded like it was recorded in a garage, but this is too much) for what they are trying to accomplish here. The vocals on this one are much better than the last release and the band seem much more with it. Impressed on their first track….? Yes..

‘Rising Sign’ again, needs a little bit rawness to it. The vocals on this one sound a little dull, think Blondie trying to be metal! The riff is too easy and the drummer hasn’t much to offer either, such a disappointment since the last track had much improvement. Thankfully though, and daren’t I say it, the riff to ‘Who Will Run to’ sounds very 80’s pop rock and much impressive, the group vocals needs a little work, but apart from that, this track seems to cut the mustard!

Again though, the vocals on ‘Confessions’… I can see what the vocalist is trying to achieve, however, her voice just isn’t “gruff” enough to carry off the Courtney Love style… much too clear.

‘Gone Away’ shows off exactly what kind of style that suits the vocalist, a very slow ballad. The guitars again, fall a little flat though and the drumming could have served up a little something more.

‘All You’ve Done’ falls flat on its arse. Unless of course, they are looking to impress the 16 year olds with too much eyeliner and fringes that cover their face… the vocals are terrible, and the group vocals sound like a load of pubescent boys who are waiting for their balls to drop… sorry guys!

‘Million Lights above’ could be a beautiful track…… maybe with more work done to it. at the moment it sounds like me, after a bottle of Jack, singing to myself while I think I sound like Bonnie Tyler, when in fact I’m more like a dying cat… then there’s ‘Hate me, Leave me’…. I’m hoping that this last track delivers something special for me to change my mind….. which, thankfully it did…. A cracking track, and with a little rawness to it, it could be made pretty special. The vocal range on this one is much better and I could imagine this lass singing alongside our beloved Doro Pesch. The riffs a little simple but work brilliantly and the little solo…. Just great!! This is a perfect way to end an album… after much awfulness, then this… this track? This is what you should be aiming for guys!!!