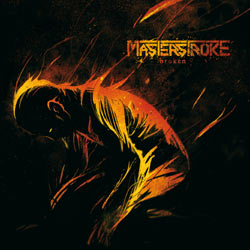 It’s always a good sign when you play a record and immediately put it on again when it’s finished. That’s what happened here, and not merely as a reviewer’s obligation. It’s not that this album is especially original or unique. Comparisons have been made with Nevermore and Evergrey. I agree. I also heard a bit of early Mercenary and even a little bit of Pagan’s Mind in the expansiveness of “Broken”. This album, the fourth from Finland’s Masterstroke since 2005, is fresh and lively. Transcending pure power metal with a serious sound, it’s intensely melodic, and the sort of album which sweeps you along, and before you know it, it’s finished. So I played it again.

Although there is a degree of Americanisation about “Broken”, I detected a strong Scandinavian influence in the colourful melodies and riffage. This is evident from the outset with “The Eye”. There’s edginess, pumping power and a superb break followed by an all-too-brief dark passage. But Masterstroke aren’t a band to hang around and the driving and colourful riffage are central to this motion-packed work. The vocals are harsh but clean, occasionally bordering on power metal. The thrashing melodies are interrupted once in a while for a dark chorus or a masterful solo. The drums reflect the energy. All in all, this is a potent mix.

“Seed of Chaos” is more of a classic heavy metal song. Some may regard it as a little cheesy but like everything else here it’s impossibly catchy and full of interesting twists without even the slightest attempt at gimmickry. This is just about great songs, good riffs and entirely co-ordinated musicianship. Personally, I preferred the swirling and energetic atmosphere of the title track “Broken”, which by virtue of its drama, most readily draws comparison with Nevermore. That is Nevermore with touches of power metal. I have to say that I found the chorus of “As We Crawl” a bit camp when set against the darkened intensity which characterises the track. “The hunter in me awaits” cries the singer to open up “Reborn in Flames”, another epic metal track which wavers between the sound of Nevermore and lyrical cheesiness. Yet the structure of the song, which flows and changes pace without apparent effort, and the musicianship are of the highest order. It’s pleasing that Masterstroke know how to end songs, which may be a minor point but can defeat their counterparts. They also know how to begin them. “My Last Day” starts in a blaze of intrigue, before embarking on another multi-layered mini metal adventure which grows and spreads. Finally “Before the End” captures all that is so strong on this album. A more measured vocal line is supported by epically dramatic and atmospheric musicianship.

I found “Broken” uplifting and never lost my interest in it. It’s a shame that it only lasts 35 minutes. With its power metal propensities, some of its choruses bordered on the cheesy and I felt that they could be slightly inconsistent with the melodic intensity, finesse, depth and occasional darkness which were being paraded with such skill around it. It’s these latter qualities which dominated my listening experience. In conclusion, “Broken” is a sophisticated and absorbing album which gave me a great deal of pleasure. I very much look forward to listening to it again.