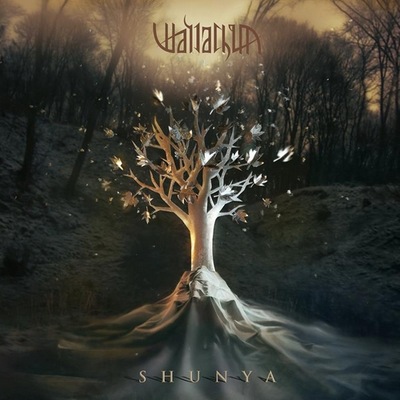 Wallachia is one Lars Stavdal, a Norwegian, and a number of supporting musicians. The band has been mostly active since 1995, since when there have been two albums. “Shunya”, advertised as a gloomy and personal work of atmospheric and symphonic black metal, is the third.

Black metal is well in evidence in the fierce opener “Dual Nothingness”. There’s nothing new here, really. It’s bleak, growling, melodic and uplifting. The style reminded me a little of Old Man’s Child. As the album develops, there’s more and more of a Celtic folk feel. The album works along a line between fiddling and dancing round the maypole on the one hand as we find on “Hypotheist” and the impressively titled “Nostalgia among the Ruins of Common Sense”, and on the other the fast and raw black metal of “Enlightened by Deception”. The style can be modern and the keyboards can be intrusive, but this work is never far away from folk metal.

“Ksatirya” is slower than most. It’s unusual and has the bleakness of Icelandic folk metal, but for all its bleak and dark canvas, the matching growling lacks authenticity. It seems more of a case of following formulae than creating epic or exciting atmospheres. Over the course of the album, I heard elements of an Irish-sounding reel, bits of Finntroll and a delivery akin to Rotting Christ but without the menace. “Harbinger of Vacuumanity” is fast and raw with rapid-fire drums, growls, and a clumsy spoken section. “The rear view mirror is broken … a higher power to take out the garbage … a cargo load of responsibility” – as lyrics they are not very traditional and may be heartfelt, both of which are ok, but they don’t fit in with the style and frankly sounded ridiculous. The final track “Emotional Ground Zero” has an element of atmosphere but shares the same weaknesses as what has gone before. Gloomy and melancholic, it is a steady and symphonic metal piece. The problem is that the violin doesn’t sound melancholic. Rather than being a track plumbing the depths of despair with its growled vocals and atmosphere, it’s nondescript and languid.

On the face of it, “Shunya” sounded promising with its suggestion of an emotional voyage of discovery and its experiences of loss and displacement. Instead what we get is a rather bland and uninspiring work of black folk metal.