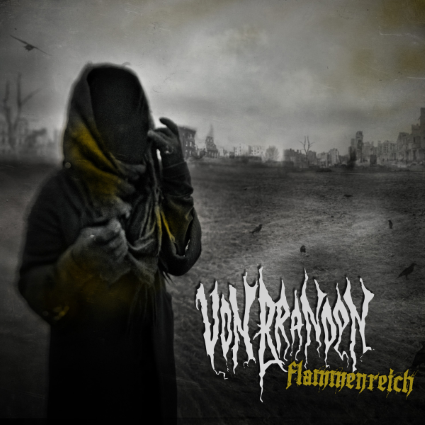 A crumbling building with a very scary and ghastly looking figure, face wrapped in alien looking bandages which hang down towards the ground greeted me in the promo photo accompanying the invite to review the digital download of this album. To be honest we are flooded with such requests although if an album is black metal related they normally get picked up. This one intrigued me straight away and I was keen to discover what lay behind the striking imagery. Von Branden are a German band who apparently comprise of members from Nightfall, Mandrake and Mephistopheles, this we are told is their second album following up from ‘Scherben’ released back in 2007. We are also informed that “hate never sounded more beautiful before,” another intriguing paradox. Let’s go through the portal and find out more!

We start with an incredibly Gothic feel to ‘Für die nächste Ewigkeit.’ There are powerful strumming guitars and an underlying piano sound, the music almost flutters like the fast beat of moth’s wings and the vocals come in, powerful, commanding and very Teutonic. Suddenly the ‘beautiful’ kicks in, the melody shines and glimmers through and the blackness takes on a very tangible post rock lushness. The hefty drum pound though shows this is as much black metal as anything else but as it slows the shoe-gaze elements beam through. The two elements combine and you are left with a canvas that has shades of dark and light working together to create a bit of a musical kaleidoscope. Everything is well balanced and this strikes as being the sort of thing that fans of avant-garde bm would certainly take a shine to and it brings to mind everything from the likes of Alcest to Dornenreich and Imperium Dekadenz.

Perhaps Von B play their trump card a bit early, the first track is so good it does really stand out and it takes a while for the other seven to gradually work their charm. They do eventually and we see lyrics revert to English for ‘Eremite’ and the vocals are again quite dictatorial compared to the maudlin and sombre tone of the instrumentation. ‘Come To Me’ roars the singer, he has got a new disciple here and having again gone to the band’s home page and watched the strange video clip for the album which shows a minute and a half of TCM inspired madness I am even more intrigued. Excellent almost flamenco etched guitar flurries bring on the title track and as it builds into a powerful pounding melody it really makes you want to slam your fist down and join in even if you have no idea what the band are singing about unless you speak German. It kind of has the command of Rammstein at their fiercest even though musically it is a million miles away.

Things wash over you and the music flows gracefully along although the course is littered with dangers and rocks are there to sink the unwary. Indie fuelled guitars and low clean vocal harmonies see us into ‘Reverence’ and it is easy to lose yourself as it clasps at you hypnotically. There is a flag waving German festival anthem practically hiding amongst the guitar weaves of ‘Verlust,’ it sounds happy and jubilant here which is kind of unexpected, still it’s good to get an upbeat section now and again. More English lyrics and back to more depressive strains see us on penultimate track ‘Desert Sand.’ It sounds like a tale of someone on the edge and wondering whether to just give in, crawling through a desert perhaps and thinking that lying down and giving up is the best option. The final and longest track ‘Monologue’ sees desperation giving way to fighting though and the pace picks up and dashes away with thickset guitar lines flailing through it all before some acoustic and electronic parts remind a lot of obscure Welsh outfit Tor Marrock (as to a certain extent the group’s visual interpretation) and then surge towards the end.

This is a highly imaginative work in all respects and the mix of styles gel very well, that first track is an absolute classic in my opinion and once heard it will not be shifted very easily. Although the visual elements more of which I have found on the group’s Facebook page are not totally original as far as either film (Scarecrows, Redneck Zombies, Texas Chainsaw Massacre, Animal Soup) or other group’s (Tor Marrock, Ghoul, Midnight) are concerned they are strikingly put together and the video clips are superbly intriguing. I would love to see whether they carry this all onto their stage show if indeed they play live. Chances of finding out outside Germany are no doubt very remote. Still I am not sure if this is the bands best work or whether that is still to come but it is definitely well worth checking out.