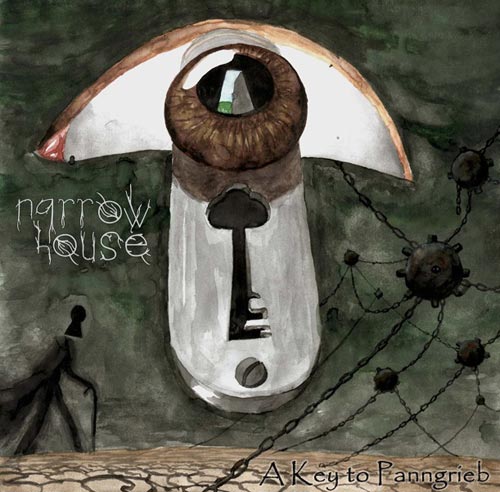 If you hunt out any promo pictures of Ukrainian band Narrow House you might be forgiven for thinking we are about to step into flouncy goth metal territory. Thankfully, though, we are deep into funeral doom here. Deep in. With a sound filled out with cello and keyboards, a touch of Shape Of Despair and very early Pantheist and the shadow, of course, of Skepticism you get an idea of the core sound. The slow, haunting melody lines and harsh, growled vocals also edge very close to some of the slow, depressive black metal projects like those of Dis Pater.

We are gently led into the Narrow House by a keyboard wave sheltering soft, spoken words. Melancholic guitars and spare drumming rise through the keyboards with no rush to greet the louder riff and death style vocals. It is a lush sound; bleak, yes but full of stately melody with the excellent addition of the cello and delivered with a poise that speaks of confidence. A fine way to begin your album career. The next track ‘Psevdor Jatunok’ sounds like Amber Asylum slowed down and with a Skepticism style riff and howl rolling over it. Whilst good on its own terms, it does somehow fail to quite reach the haunting, majestic depths of those two masters and unfair as it might be, this is something that begins to nag at me until I make a conscious effort to quell it. On their own terms, Narrow House are the most accomplished new funeral doom band that I have heard in some time: They use the cello and keyboards beautifully to ease the flow from chord to chord in the riff, and the vocals have a fine tone to them. However their minor downfall (and in the scheme of things it is minor) is that because of their influences the shadow of the Finnish Overlords of the End of All Things, Skepticism, looms so large that it threatens to engulf them at times as you cannot avoid the thoughts of how they would have let the vocals inhale and exhale with the riff here, or pushed out the clouds of melody there. But in a way this perhaps is a kind of compliment as to invoke that comparison in that way shows how fine a band Narrow House actually are. They don’t wrench my emotions quite as much as they should, but it never once dissolves into cold and clinical doom so we are talking degrees and shades here. A little attention to detail, a tighter touch in the arrangements or the production to allow things to flower fully. Nit picking, yes, but only because Narrow House are so very close to something special and I so want them to get there.

Four songs, around forty five minutes in total. Majestic, subtle and darkly beautiful and they even have a great name. If funeral doom is your thing then take a long, deep breath and step into Narrow House. They will be one of the best very, very soon.