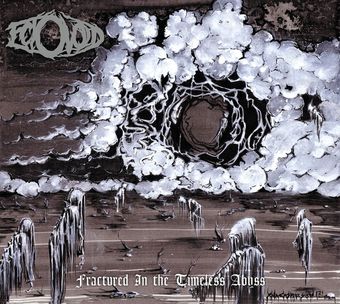 Helltrasher Productions present us with Ectovoid’s debut album, a blacked death affair – with no thrash in sight, ironically. Instead of calling ‘ol good midlands Brumingham their home, we’re talking Alabamians here… die-hards Yankee marauders of the darkened realms of old school, and acolytes of the NWoWIA (New Wave of Worshipping Incantation A lot – though in this case the ‘I’ could just as well stand for Immolation or Necros Christos too…  wait, it couldn’t, wait, forget about the latter, let’s continue.

A deliberately muddy production bestows a weirdly familiar haunting sensation upon the listener. It’d be a stretch to say that it’s unique, though. There’s a spiteful sense of restrictedness to the music – the wall that shields their death metal isolation is never penetrated, not even approached. To a listener, especially a reviewer, the task of reviewing such an album is not an easy one. How does one judge something that sounds exactly like a heap loads of other bands? It consequently also lacks in variation and becomes rather monotone and predictable quite quickly. Has DM really run out of leeway for creativity… to the extent that worship is the only way? On this basis, I’d give this record a ridiculously low grade. It’s been done before and it’s been done better. Only I cannot make myself do it, for the simple reason that, well, I really enjoy this record.

The tried and tested formula is at play here. The ever-effective battled death metal equation is executed flawlessly by what can only be dedicated acolytes of the cause. The record is filled the same riffs you’ve heard before, yet they’ve been made unpredictable and powerful; not through originality though, but rather through sounding like a well oiled engine of a band. There’s also seemingly an upwards curve going on, as the musicians seems to warm up as the album progresses. In full this is an incredibly solid album, adding to a large pool of DM-revival bands. It’s a pool that is about to burst, though (The Simpsons, 6×1: Bart Of Darkness), and maybe it’s, slowly but surely, getting time to bring back something else… like thrash metal, maybe? We all loved that for like 25 minutes, didn’t we?