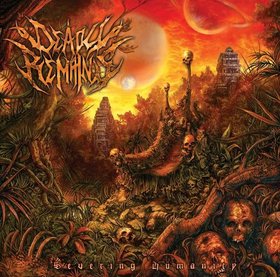 Now, US brutal death metal obviously has its lovers and haters – especially given the kind of one-dimensional stuff that certain labels began spitting out in the late 90s and early 00s. Taking their inspiration from the fast, brutal and technical aspects of death metal purveyors such as Suffocation and Pyrexia, a torrent of bands emerged who pretty much only fixated on the ultra-extreme aspects. Of course, this pursuit came at the expense of things like songwriting, nuance and subtlety. I’m one of the crowd which loves brutal death metal but who has equally seen a fair amount of money wasted on albums which are completely anonymous and devoid of purpose. Approaching Deadly Remains then, I was cautious.

‘Severing Humanity’ begins with an apparent nod to the O.G., Ice-T, in ‘Home Invasion’. As with a million death metal albums you’ve already heard, the sounds of a yelping lady accompanied by intermittent lumping sets the scene. Half-expecting something in the vein of Lividity (before they went strange), I was instead greeted with a bunch of fast riffs, hammering drums and prolapsed vocals sounding very much like the last Disgorge (US) album. Pinch harmonics, some slow grinding sections and a general morass of brutality certainly draws parallels with their Californian brethren however there is more diversity to Deadly Remains’ delivery. Boasting a solo which wouldn’t be out of place on an early Cannibal Corpse record, the band makes clear that whilst they enjoy playing a lot of different riffs in a song and bludgeoning, they are not obsessed with technicality or speed. Well they are, but they make it more interesting than some bands in this genre seem capable of.

‘Cosmic Necrosis’ starts with a brief, extraterrestrial bass solo, before one hell of a grinding riff gets the track going. Almost predictably, the gears shift from slow to extremely fast with a bunch more pinch harmonics thrown in for good measure. Again though, what I must emphasise is how listenable this band makes such conventions. The high point of the second track is a ‘Suffocation solo’ which pirouettes into all manner of high-pitched weirdness. As the album unfolds, there are some indications of social commentary on ‘Human Trafficking’; a bit of Alex Webster-like bass contortion and early Atheist-styled cosmology on ‘Instincts of Flesh’, and some jolly mental fret flourishes in a tune like ‘Equilibrium Obsolete’. That last one particularly embodies the elements of fine musicianship and digestible arrangements which Deadly Remains marries so well: betwixt lovely pedal work, immediate fills and furious fretwork, there is a tsunami of sub-atomic grinding death.

Deadly Remains’ technical proficiency seems outstanding, and whilst all techniques are easily identifiable from other bands’ work, they are employed tastefully. This is enjoyable brutal death metal; music in which I imagine Neanderthals and musicians alike can find something to appreciate.