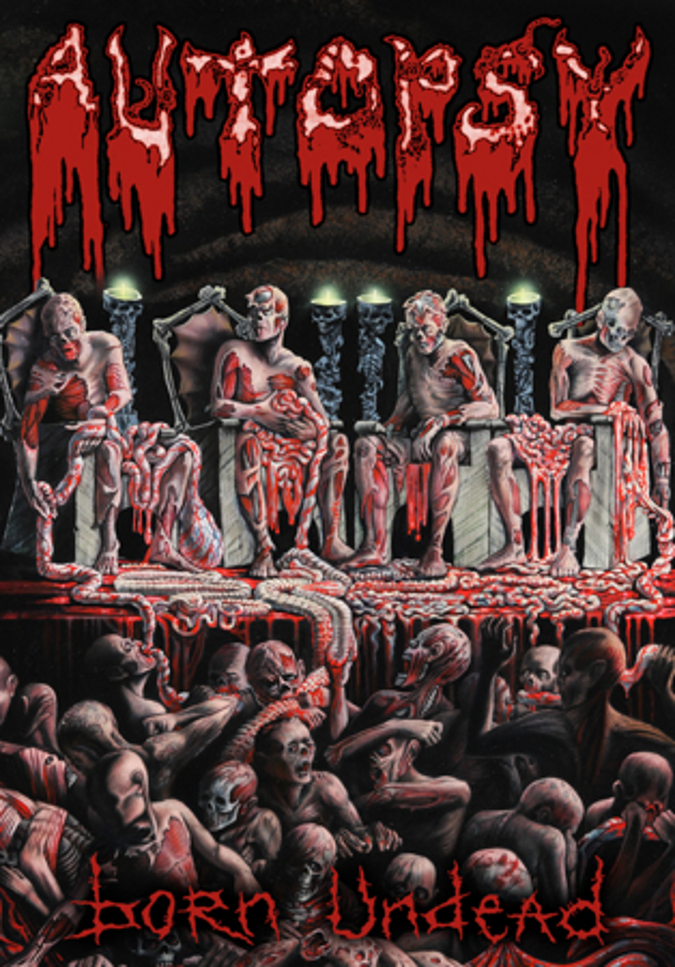 A new Autopsy DVD already? I was barely done having sex with the previous mythbuster ‘Dark Crusades’. It brought us Autopsy’s legacy, the long-dead legend, a corpse that was never to rise again. We experienced a pack of teenagers playing in their living room in the eighties. We saw them take their first steps live, experiencing shows across American from ’93 to ’94. A glorious time in death metal, an era when their music was unique and scared the shit out of people – pure gore, mental agony and pus…’those were the days my friend, we thought they’d never end. ‘

In a way, they never did, either. The doom of Autopsy lead to rise of Abscess in 94/95, a brainchild of Autopsy’s Reifert (drums, vocals) and Coralles (guitars). Behind the scenes the torture never stopped, instead brewing, preparing for the second coming of the beast. And so it came to be, that in the fall of September 2008, that the sandman was told to fuck off and release Autopsy from its deep slumber, unleashed once more to wreak havoc and teach a lesson or two to today’s abysmal death metal scene. Eyebrows may have been raised, but few questioned the reunited Frisco legends’ capabilities. A punishing 7” single was followed by a crushing EP and a punishing full-length, ripping the faces off all doubters of the ‘psy.

The riffs, the aura… the doom, the madness… the fear, the loathing; It was all back. The world’s filthiest coven showed half-arsed middle-agers how reunions should be done. The shows were vicious and so were the albums – classics at birth. Yet all things change. Production was cleaner and a sense of menace/malice seemed missing. Whilst ancient releases made one run for their lives, these albums felt safer – creating a pleasant listening experience. Things had turned flashier & glossier. It was still the old Autopsy, yet reborn… and why not, you’d think. Haven’t they always been about striving to break barriers… about being before their time? Be that as it may, when it came to the crunch, the legends delivered. From their comeback at the Maryland Deathfest in 2010, they marched onto European stage, decimating (killing 1/10) PartySan in Germany and Hole In The Sky in Norway, returning to the US for Slaughter By The Water in 2011.

It is these above-mentioned shows that make up the live-section on this brand new 5-hour motherbitch of a DVD. Unlike previously filmed Autopsy shows, we are talking high-def here. You can literally see every single crow’s feet… and who wouldn’t want to experience Coralles’ whale-sized beer-belly clearer than ever before? Jokes aside, what we have here is modern and flashy HD action. To my mind HD and Autopsy don’t go hand in hand by any stretch of the imagination. In a way, these live clips take away from the mystique of the band, making them human, erasing the illusion of mad alcoholic, weed-worshipping gore-gods. Having been there, in the front row, at the PartySan show, I got much less of a kick out of the video than I thought I would… it just didn’t feel right seeing them like that. Anyhow, what we got here are top quality live shows, and if you’re not obsessively old school, like me, then you are bound to get a kick out of these. The songs are played perfectly and stage presence is second to none… there really is nothing to complain about. We get the same dangerous-as-Michael-Barrymore’s-pool-party live band from the deepest depths of rotting hells (especially the less-professionally filmed 2011 gig is highly satisfying).

Let’s get to the most intriguing bit, the one that fundamentally sets this apart from ‘Dark Crusades’: the documentary… or is it a rockumentary? Or a dead-whore-in-a-ditch-omentary? Who knows?

And be that as it may, this is where Autopsy fanatics will get all the history from the horse’s mouth… or should we say raging lunatics’ mouth? Who knows? Either how, these semi-hilarious puns are seriously starting to disturb the flow of this very review… so let us depart from this paragraph and start a new one. A better one.

Some two hours of death metal history are upon us: namely A History Of Horror. We get a run-through of Autopsy career, from the very start; myths are lifted, questions answered; noobs get their introduction as diehards drool in orgasmic possession. We meet people from the band’s past, as they give us an insight into the good ‘ol days. We get Paul Mazurkiewicz and Alex Webster of Cannibal Corpse (saying the words ‘like’ and ‘heavy’ a lot). Then there’s the exuberant Obliteration guys, showcasing awful Norwegian comedy, only topped by Exhumed’s Ross Sewage improvisational shit banter, followed by band-mate Matt Harvey, who apparently the epitome of straight edge now. Dumb cameos aside, this documentary is about Autopsy, not their fans (at least that’s the bit I like). Finally, some ten minutes in, we are presented with original bassist Eric Eigard, and off we go into blissful melancholy. Soon followed by Reifert, Cutler and the rest of the crew. We get Corelles’ background for a starter and are then run through the years of making DM goodness… for any fan, this is awesomeness galore.

A two-hour documentary was always going to be a-bit-long. Not as long as Lars Von Trier’s Europe trilogy, but long none the less. A die-hard fan, such as myself, obviously watches the documentary time and time again, getting to know every detail… but I can imagine that, for an outsider, this might be as boring/infuriating someone with a cerveu watching Russell Howard’s Good News. The other inevitable complaint, as with every documentary that de-mystifies a band, is the fact that we get to know these guys way too well. They come across as chummy nice guys… to the extent that I they start reminding me of the kids that I excessively bullied in school. These guys are my musical gods, ffs! Last thing I want to do is listening to ‘Blood Orgy’ and get flashbacks of detention. Flashbacks of washing the blood of my hands. Flashbacks of… let’s stop that there, Ls & Gs…

I exaggerate, of course. I am much chuffed with this documentary. It is thorough and always satisfying. The same goes for all of this DVD. It’s hours of Autopsy worship – a must for any fan. Get it or be burnt to a fuck.