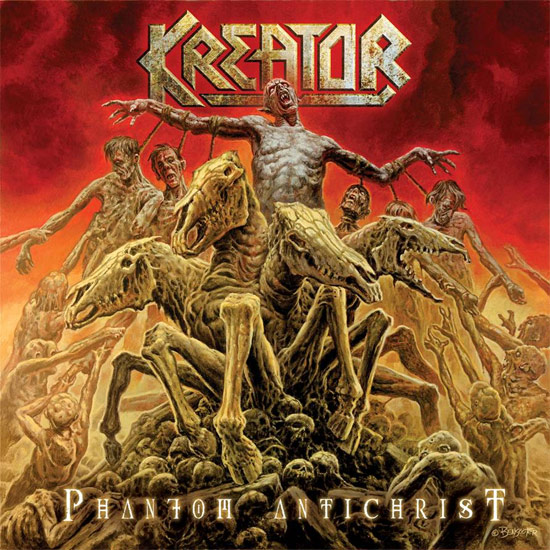 “Mars Mantra” and “Phantom Antichrist” are listed as a single track, however the former is an instrumental intro for the album which becomes the title track where Mille Petrozza’s distinct vocals along with his and Sami Yli-Sirniö’s guitar riffs usage combine with Ventor’s relentless drums attack and Christian “Speesy” Giesler’s bass undercurrent to bring us Kreator’s well-known brand of German thrash.

Wasting no time in getting up to speed “Death To The World” gives us an apocalypse described as only these German titans can, with heavy guitars and precisely beaten drums.

After just spending the weekend in Germany, where the weather was decidedly wet owing to torrential downpours, “From Flood Into Fire” would have been appropriate if it was hot when I got back to theUK, but alas, it’s overcast, but there are floods up north. As for the lyrics, Mille is correct, we are all indeed in this together no matter what the earth throws at us, as there’s very little we can do to stop natural forces and their consequent disasters. The heady rhythm pounded out by Ventor gets you banging your head and singing along with the pleasant vocal melody and hauntingly beautiful clean verse.

With a very ‘Endorama’ feel to it, “Civilization Collapse” opens up slowly to lull you in so it can rip your head off as the riot begins and they hit their thrash stride full of lead bends, squalls and trade-offs.

You can quickly tell that “United In Hate” is going to be fan favourite as it has all the hallmarks of a great Kreator track. Drum blasting, hyper fast guitar riffs with even faster changes with acerbic vocals shouted over the mélange.

“The Few, The Proud, The Broken” has a great choppy and bouncy feel to it, even when the drums are going at full tilt or coming to almost a complete standstill.

Who knew that clean guitars with whispered vocals could be as venomous as they are when used in the way done on “Your Heaven, My Hell”? The regular vocals just drive the message home when they come in to play.

The leads on “Victory Will Come” are exceptional, but then it’s also what you’d expect from Kreator, as is the repetitive chant-like quality of the chorus, which means I’m sure it’ll get plenty of enthusiasm when played live.

A mellow mid-paced tempo is employed on “Until Our Paths Cross Again” to plod along allowing the lead to flow and build in speed while the main rhythm riff remains steady until the midpoint when everything just picks up pace and all hell breaks loose for the lead break, then slows down again to steadily pound down the path to the end of the album.

Perhaps I’m a little biased being a huge Kreator fan, but even if you aren’t you should enjoy this finely crafted work of art as it’s quite possibly the best thrash album that’s been released this decade.