Doro – Raise Your First In The Air (Nuclear Blast) 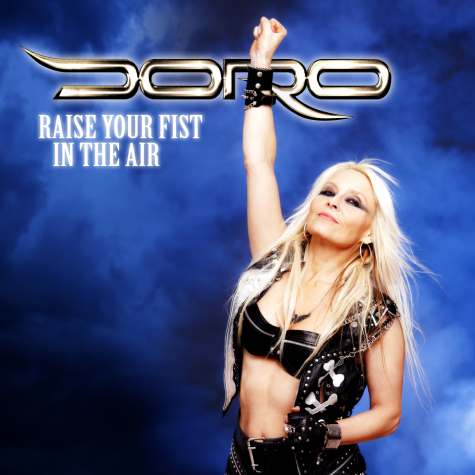 My name is Gizmo, and I am a Doro fan. There, said it. Not just her voice and her music but her determination, her integrity, her personality and even her bravery (especially once in the face of an Alan Partridge moment with a fan that you’ll find on the Für Immer DVD. Priceless.)

This, however, I don’t entirely get. Well I do; it’s a release so she has something for the new label to flog to tie in with her Wacken appearance and to remind us she has a new album due soon and maybe to distract us from the compilation that her previous label are pushing. But as a stand alone release it is sadly pointless. Four tracks yes, but the lead out song is on twice (once in English, once in French for some reason which kind of seems stingy). There is nothing wrong with the music, mind you. ‘Raise Your Fist In The Air’ sounds exactly like you would hope and imagine a track by Doro called Raise Your Fist In The Air would sound like: True heavy metal rabble rousing built for a festival with the lady’s distinctive roar and warble on top form. ‘Victory’ is similar but less of the mob sing along. ‘Engel’ is a fine Doro power ballad in German. It is Doro from the tip of her toes to the Metal Queen crown on her head. She sounds as spirited and as on form as her last two studio albums have been. It all bodes well for both her Wacken performance and the new album.

With something like this though you have to ask “Would I buy it?” If they produced a special version for the festival and I was there then yeah, maybe. But if not? Nah. Out is such a slight release for anyone other than completists. It’s what Spotify was made for and as an EP is a curiously old fashioned and short sighted idea by the label I reckon.

Still, it is Doro and it is great fun summer festival metal so it’d be worth a few pence for the title track from Amazon or your other legit download sites of choice. And it does make me want to hear the new album, so I guess something worked. Nice picture too.