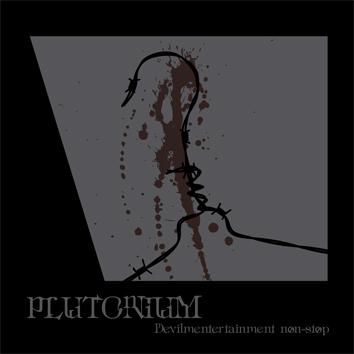 Listening to v.e.g.a. yesterday got me thinking that black metal and industrial go together so fantastically well it’s a shame more bands don’t do it. Plutonium, a solo act fromSweden, is another fine example of this integration of styles and their second album has done a commendable job of winning me over. Kicking off with the snappily-titled ‘A Tribute To The Tools Of The Cosmic Abortionist’ one is sucked into its harsh, colourless void via a nasty distorted guitar surrounded by fuzz; a relatively brief opening that steamrolls through into the title-track carrying on with that air of menace. Around the four minute mark we are thrown a curveball as things suddenly get a bit cosmic, sprinkling the space dust that sparkles and fizzes like stars in a black abyss. The vocals are callous and gnarly with plenty of venom spewed forth. ‘Peace Keeper’ kicks in with a marching drum and a dark bellowing spoken passage, as we are marched forth into a bleak, war-torn landscape in a manner highly reminiscent of Mayhem’s Grand Declaration Of War’. There’s a dark ambient feel to this as the synths work their way in putting down layer upon layer of grimness within a horror-drenched atmosphere. There’s an underlying sense of foreboding creeping up from the depths below here, and eerie female vocals work well.

‘The Misery King’ brings things back to life with a pillaging swagger, full of menace and coming at you with some kind of medieval murder weapon firmly in hand to bludgeon all it may pass while spreading misery across the land. The vocals are vile and hate-riddled and make you stand up and take note. ‘Unintelligent Design’ slows to a mid pace prowl, working its hypnotic allure to put the listener at great unease. The melody writhes in a sinuous repetition, while the atmosphere is dark, intense and quite terrifying. When all hushes down and the bass comes more into focus then it assumes a real depressive tone with a touch of Shining about it. I love the urgency and pseudo-classical terror on ‘Zero Swarm’, with its relentless scything violin sound. Encased within the madness out comes a fierce, tribal industrialized beat to get the troops riled up and ready for attack before kicking out some bendy electro beats and a fearsome “Ugh”!

‘Nuclear War Incense’ is another slow, creeping number full of menace and atmosphere. There is loads of atmosphere throughout this whole album in fact, and I love its martial industrial noise vibe. ‘Det Doda Exemplets Makt’ is two minutes of white noise, quite spaced out with a woman’s screams, leading into the finale of ‘Hell Is All Around’ which carries on that martial beat and fires out those machine gun blasts from all angles. I love the sinister atmosphere and the ferocity of this album, it is passionate and hellish like black metal should be and really got into my head. Excellent stuff!