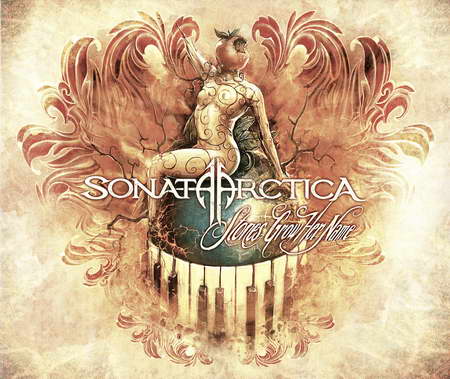 These Finnish power metallers formed in 1996 and called themselves  ‘Tricky Means, but in 1999 they changed to ‘Sonata Arctica’ with members such as Tony Kakkow also of Northern Kings, an 80s karaoke style band with Nightwish Bassist/Singer Marco Hietala.

Their first single (Un-Opened) was released back in 1999 which was followed by a whopping 14 more singles including the 2007 classic ‘Paid in Full’, as well as the singles there has been 6 full length albums, the first released was ‘Ecliptica’ in 1990 and their last in 2009 ‘The Days of Gray’s . Now finally 3 years later we have their 7th Album ‘Stones Grow Her Name’.

A superb start to the album with ‘Only The Broken Hearts (Make you Beautiful), the vocals of Tony Kakkow are still as amazing as their first album. There’s something fantastic about the fact he sings with broken English.  A funky beat, catchy chorus and a delicious guitar solo spells another cracking track. ‘Shitload O Money’ shows off a slightly different style for Sonata with a dance beat (not in a techno chav way) yet the chorus still maintains that well known sound. Toward the end the music gets almost circus themed with the keyboards going a little eerie.

A haunting piano intro to ‘Losing My Insanity’ which shortly after turns into an up-tempo sing-along track and again as in most of Sonata’s stuff, the keyboards blow you away along with a guitar solo that’s on fire, fantastic!.  A heavy start with both drums and bass and a dash of Eastern feel with ‘Somewhere Close to You’. The vocals on this one are exceptionally good, full of feeling and gut wrenching screams then, Slowing down for ‘I have a Right’ which to be fair isn’t the strongest track on the album but still, definitely not crap ether. However, personally, I always feel the slower Sonata tracks aren’t as good as their bouncy faster and happy-doolally stuff. ‘Alone in Heaven’ started off slow but lifted into a track which reminded me a lot of Ayreon. Don’t know of them? Look it up!. ‘The Day’ took a few listens too for me to actually like it. It’s not the easiest track to listen to but after a few goes, you’ll realise it’s another winner.  It’s much softer than their usual stuff and shows off Tony’s vocals much more than the previous ones.

There’s a hillbilly theme on the track ‘Cinderbox’ so get your cotton eye Joe dance on the go! I never thought of seeing the band chewing tobacco with straw hats playing a banjo but there it is in my head!  Anyhow, a crazy track, but it works.

Coming towards the end of the album it slows down with ‘Don’t Be Mean’, quite depressing, something you’d listen to after a crappy breakup. Sob sob… However, is this banjo and violins I hear for the next track ‘Wildfire II –One with the Mountains’? A roar of thunder and some spooky violins then in with some marching drums! The beat gets faster and the choruses get catchier… you have to hand it to Sonata, they are definitely one on their own. Then moving on to the last track ‘Wildfire II –WildfireTown– Population 0’ there’s the thunder again and with a heavy metal feel this time. Another sing-along one though, if you’re able to keep up. Not as catchy and maybe a little all over the place but still maintaining enough coolness to keep it going. Mind… not the best track to end on.

Another great album from Sonata Arctica, as always some cracking tracks and still some that could be better. A band that I’d recommend to see live and even buy their music. Enough top songs to keep you wanting more.