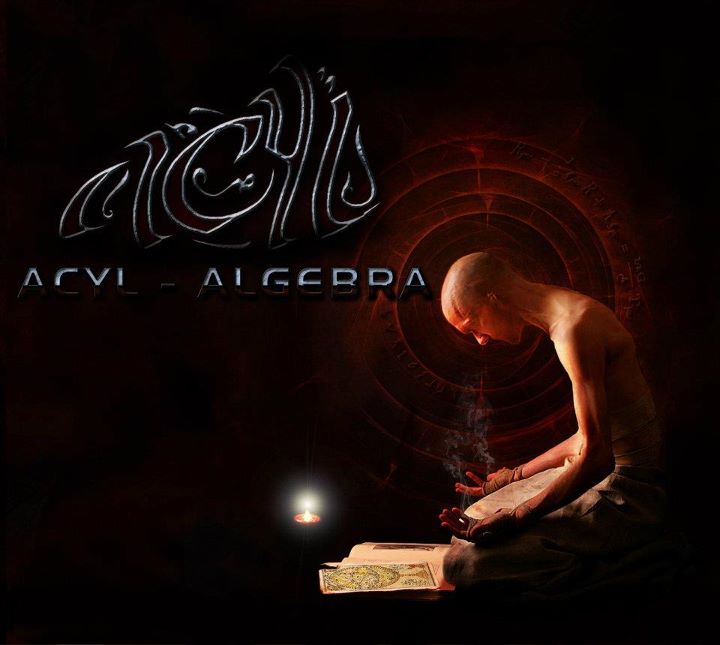 I really liked Acyl’s debut ep “Angel’s Sin” and so was very pleased to have the chance to review “Algebra”, their first album. Acyl are an Algerian-French experimental metal band who draw on their North African origins and use traditional sounds and instruments such as bendirs, guesba and karkabous. The members of the band have diverse experiences in playing music, ranging from metal, including links to Arkan, to jazz blues as well as ethnic influences, so all in all the mix is colourful.

The scene is set with “Ungratefulness”. Starting as a chant, the drum beat is persistent and exotic, and the singer’s haunting voice enters the fray. It cranks up, resulting in a powerful death metal section. But the Arabic flavour is always there, overtly and covertly and that exotic drum beat continues. The combination of death metal and Arabic vocals take it forward on “Head On Crash”. There’s an oud solo, before the clouds darken and we hear crashing metal complete with harsh vocals. Heavy, heavy metal indeed. The two-chapter “Al Kiama” suddenly breaks into a calm yet sinister ethnic North African section. It’s fiery too. The chant in the background and the deep bass add conflicting flavours. As the second chapter comes in, the acoustic sound leads to dark and moody heaviness. I asked an Algerian friend to confirm whether this irregularity, where the music swings from one mood to another, is typical and he said it isn’t. This isn’t entirely metal music, nor is it North African music. It is Acyl’s music. The ethnic interventions of “Barzakh” are supported by the deep, dark and didactically monotone vocals. There’s a mix of traditional North African and death metal darkness. It’s not always easy to follow. This is the experimental side of Acyl. The steady metal rhythm is interrupted by a blast on the oud, before it goes haywire, and we hear what sound like distorted industrial fairground sounds. “Back to Death” features avant-garde acoustic and drum work. I couldn’t work out where it was heading. But it does build up and those acoustic and drum sounds become richer. It’s all about the rhythm.

“Algebra” seemed to be getting odder and odder but it’s nonetheless engaging. From “Babyl Chapter 1: The False Gods” and the final half of the album, the mood changes to a still darker aspect. “The False Gods” and the second chapter “Weak and Proud” are strange and slow, and indeed are unpleasant and unappealing, especially at a vocal level. We seem to be in a no man’s land between death and straight metal. It slows down as it progresses into a huge but shadowy section involving the vocalist, deep and subtle guitar and a dark abyss. It’s irregular, progressive if you like, and not easy to grasp. This however was considerably better than the first two chapters of “Creation” which follow – “Demiurge” and “The Mold”. Dark and sultry, Acyl seem to have entered folk music territory. Where at the beginning the flat vocals were haunting, they’re now just dull. It’s like listening to a North African version of Planxty. But it’s as dry as the desert and I just couldn’t get any feeling from it. The third chapter “Autonomy” features a traditional North African chant. It’s rousing. Meanwhile the metal provides a meaty background The sound is deep and grainy and harsh, but is enriched as ever by the hypnotic drum beat. It builds up and fades. The potential is here but the album ends on a downbeat note with the discordant, drab, monotone and folksy “Hijrah”.

Undoubtedly “Algebra” contains an interesting mix of modern metal and traditional Maghreban and Saharan sounds and melodies. Add to that Acyl’s tendency to be progressive and experimental and I just wonder if they’ve taken too much on. The album is bitty and irregular and from inspiring beginnings, gets stuck as it progresses in gloom, torpor or isolation. Some parts of this album were really good and the fusion of sounds works well, but other parts for me were dull, very hard to digest and incoherent. “Algebra” may mean something but I didn’t entirely get the full musical concept or the weight of tradition behind the album, I’m afraid. This is Acyl’s first full album and either I’ve missed something significant about it or it needed re-working. There are many highlights and it’s worth a listen, as is their ep “Angel’s Sin”, but I’m sorry to say that my initial delight turned to disappointment and bewilderment.