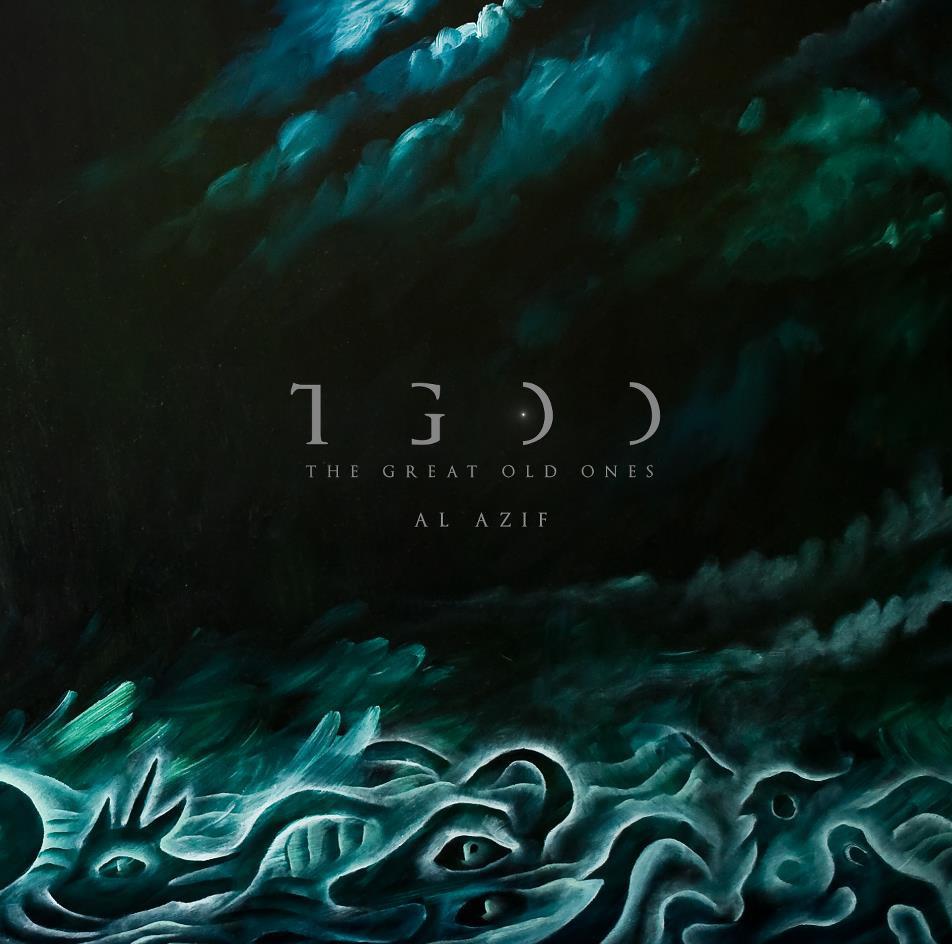 If you know your H.P. Lovecraft then there’s a good chance you’ll be au fait with most of the themes referred to on this album. The Great Old Ones are a kind of ancient deity in the Cthulu Mythos, whom were long ago imprisoned; some within the earth and many beneath the sea…which goes some way to explain the somewhat oceanic vibe that can be found on this album. Yes, as you might have gathered by now, Al Azif is a concept album based around Lovecraftian themes, which let’s face it is hardly an uncommon subject in the world of metal. Coming from underground French label Les Acteurs De L’Ombres Productions naturally gave me a certain amount of confidence that this would be a work of high quality, as they are a label that don’t waste time snapping up every generic band with no substance crying out for a deal for the sake of it.

This debut album from the French quintet emerges with an oppressive, doomish guitar that gradually draws in the listener before really coming to fruition. Dark, fuzz-coated basslines and relentless drumming gives a raw, ferocious edge while there strong, sweeping melodies give a resplendent aura of melancholy. There are some lush reflective tones to be heard in places that compliment the more aggressive parts nicely and the vocal rasps are filled with desperation and emotion. Track two, ‘Visions Of R’lyeh’ proudly makes itself heard with a strong rhythm and a mesmerising jangly guitar melody, while beneath the ocean waves crash violently and attempt to engulf the listener within its layers of horror. There is a real strained feeling and oppressive, cloying air that reminds heavily of Floridian depressives Benighted In Sodom. The next track ‘Jonas’ ushers in to the sound of calming waves washing gently upon the shore lulling one into a false sense of security before grating at the eardrums with a clanging industrialized chugging noise that has a very post-hardcore feel to it. This number is slow, meandering…it floats sinisterly yet serenely along the ocean bed winding its way through the tentacles and fauna. I do like the dark, moody vibe to this one, it feels rather sinister yet there’s almost a lackadaisical dreaminess overlying it at times, as hypnotically shoegazy guitars mix with ferocious, intense vocal rasps.

‘Rue D’Auseil’ continues that dreamy yet dark disposition as it sweeps in with some rather sorrowful strings and tender guitar strums, while ‘The Truth’ blends that against a menacing backdrop that lures you in with its slow, sinuous melody, drawing you in to its lair before unleashing a vicious assault against you as it gnaws on your flesh while layers of sorrowful melancholy wash over you. The closing track, ‘My Love For The Stars’ at times has a hint of Shining about it when it all breaks apart, returning with a booming bass and subtle guitar line that trails out to the end. This is a good, solid album that I would recommend greatly to any fan of depressive black metal. It has a dark, foreboding atmosphere, lots of melancholy and passion particularly in the guitars and the angst-riddled rasps and genuinely ferocious black metal rhythms. As a debut this is a fine effort, although I think there are better things to come from The Great Old Ones.