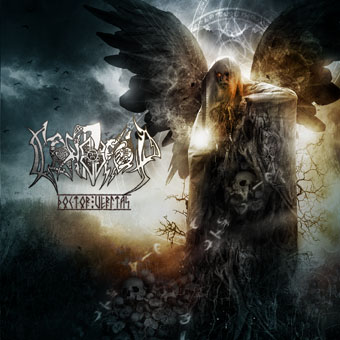 If  like me you have been sitting there attempting to pronounce this bands name and letting it roll off your tongue you probably also want to know its meaning. Well the name translates as roughly ‘Mystic Mountain’ and alludes to a knight in traditional East Slavic oral epic narrative poems known as Bylina. So it is pretty much a perfect name for this band from the fertile hotbed of Ukraine. The group themselves have far reaching fronds and their family tree branches out embracing members from such acts as Thunderkraft, Quintessence Mystica and Triglav as well as former players from Drudkh and Astrofaes. This, their third album was my first encounter with the group and as the rather strange and intriguing album title portends it was not anything that pre conceived ideas could have prepared me for. Although rooted in the sounds and ideas seen in Ukrainian black metal and partly synonymous with the aforementioned acts this goes a bit beyond expectations and is in a word ‘odd!’

Surgery time commences with a traditional feel behind it and the sweep of violins decrying ‘In Praise Of Fallen Heroes.’ The folk etched melody is strong and counterbalanced by singer Arius gravid rasps before a drum bombast ploughs in and whips the song off. There is a strong feel of marching Cossacks as the militaristic flavours come through and it is an intriguing opening song not really leaving you with any clear definition of what is going to follow. Lyrics are ever changing and in second number, the strangely entitled ”Work Hard, Eat, Watch’ we change to English; the band also use Russian, Ukrainian and French. We go into this with a carnival cavalcade and the music takes a severe twist and turn into avant-garde territories and cites the crazed likes of everyone from Arcturus to DHG in the process. With the singer acting as circus ringmaster and also laying out some neat death laden roars the ever changing nuances of the song do leave you somewhat scratching your head and wondering what it’s all about. Well not going too far into concepts here but we are told it is an expansive universal cosmological theme running through, taking everything in from societal problems and human emotions. It might be easier to just settle back and listen to the deranged music. Amongst the roars and pummelling drums of ‘The Manifesto’ we get a splash of prog laden xylophone and the rampant melody is richly augmented by chugging guitars and bass marrying lots of different styles together yet somehow allowing them to gel cohesively. What’s been missed so far, is that some spooky Theremin on title track ‘Doctor Veritas’ and how about some moody saxophone? Perhaps this particular doc dabbles with psychotherapy and is playing with our collective minds.

The album is a bit of a rollercoaster ride, a bumpy one that goes up a lot and sometimes catches you off guard with a sudden plummet. It twists and turns all over the place and the musicianship really does impress. I have to admit that I have had this in my hands for quite some time and it has taken me a lot of plays to get to grips with it anywhere near enough to formulate a review so it is not an album to go into blind, expecting it all to quickly snap into place. The black, death parts will be easy enough to digest but it is what Svyatogor do with them that is interesting and there is plenty going on over the near hour length running time to have you bamboozled over it all. ‘Spit And Forget’ is a case in point flowing from traditional metal guitar licks to fast paced blackness and galloping death laden fury all wrapped up in a skein of progressiveness and blood thirsty yells! It’s a wild ride and probably not one to undertake after a bong load unless you really want to achieve meltdown.

So if you are looking for something that goes against the grains of what you would expect from the Ukrainian hordes this is certainly the place to come and prove that the bands are not all straight laced and as far as the nature of the area is concerned they may well have stumbled across a crop of particularly potent mushrooms!