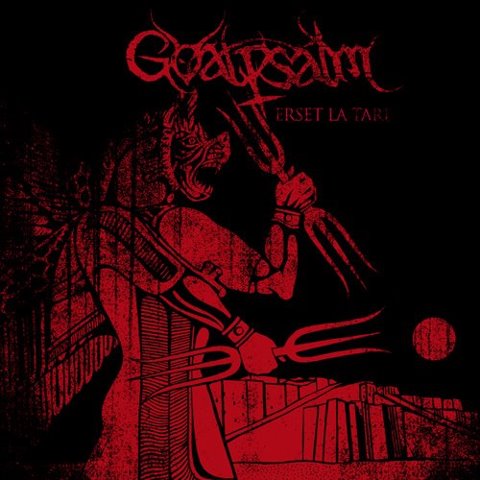 I would say here is something new and different from Aesthetic Death but frankly everything we get from this label is different and the acts they sign are all quite unique and at times unclassifiable. With Goatpsalm we take a journey back in time to ancient civilisations and Sumerian crypts where the gods are all important and the power of ancient deities are worshipped in all their foul necromantic glory. These stygian places are explored very carefully as danger is round every dark corner and once you enter these long forgotten labyrinths only madness and death are your release.

The practitioners behind these psalms are known as Baal Shaggashtu, Baal Utuuka and Baal Shedu. Nothing more can be said of these explorers as they remain shrouded in sinister secrecy behind their instruments and chants which are used to evoke intrigue and horror and perhaps to summon those that are long forgotten back into the present world.

So after the hyperbole what you really want to know is what it all sounds like, right? Well what we have are three long tracks that span the 45 minute running time of the disc. If I used the words dark ambient and death industrial as does the press sheet that should put you in the right direction and it is interesting to note that the album is part dedicated to Abruptum and MZ412.

First we have the desolate sounds of Utux-Xul which my online Sumerian dictionary (yep really I found one) tells me translates as Evil Spirit. It also tells me the album title means ‘Land Of No Return’ in case you too were wondering. Are we perhaps in the land of Pazuzu? Well it seems that way as wind quietly blows sand around  and the track very slowly builds around a mournful guitar chord and sinister vocal croaking and gurgles slothfully uncoiling out the void. This is very minimalist but sets out at crafting an atmosphere around the sound textures that does have you shivering uncomfortably. One thing not advised is doing an Ouija board to this, who knows what would come through but it would not be very pleasant. Light some heady incense, turn off all the lights and be taken off with this one; astral projection is no doubt a distinct possibility. You could also follow the words in the booklet, it is the only way of achieving further enlightenment as understanding the somewhat ghastly intonations is not possible. Everything rises and gets headier as the ritual continues, guitars have echo and reverb and the vocals ever more demonic. By the time this snarls near to conclusion there is very much the feeling that they are now speaking in tongues or reciting from a very evil book.

We are next taken to ‘Bab-Illu’ (The Gate Of God). Acoustic fret-work meanders and unravels over a Middle Eastern sounding tapestry that is sultry and warming. This track is purely instrumental and feels like the sun coming up after a particularly dreadful night. It acts as a short bridge between the two main pieces the next of these ‘Under The Trident Of Ramanu’ casts a shroud over the light once more. Finally we have what sounds like a full blooded work rather than mere ambient soundscapes. A jagged guitar chord and guttural vocals boom in with a cavernous feel about them. It is a blackened evisceration and perhaps puts the listener in a more comfortable place musically. It is a bit of a sludgy dirge at times which feels right considering the deep dark vibe we have previously traversed. However there are also some solo flailing guitar riffs and almost croon laden vocals amidst it all. Suddenly we are left just for the guitars to wail around, slithering off and reaching out for the light, maybe trying to escape from their entombment but blocked as foul eldritch croaks pervade the stygian realms once more. A harsh industrial clamour builds, hell has regained control. Calming down into a throbbing hum and lone ethnic guitar chord we are now in the realm of the dead? THE END!